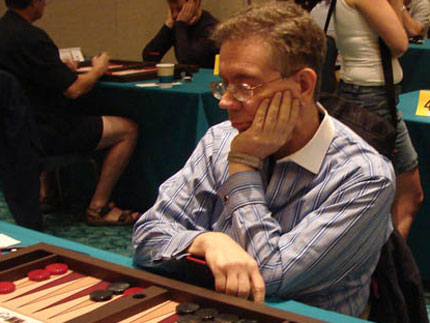 Only three people have won the backgammon world championship twice including the legend that is Bill Robertie. So we thought we’d send him a bone club board to get his opinion. Here is what Bill Thought…

I recently received for review a set from one of the newest suppliers, Bone.Club. The company is located in the U.K. but sells worldwide through its website, www.boneclub.co.uk. I picked a color scheme called ‘A Kind of Blue’ (blue, black, and yellow), but several other color schemes are available, such as Purple Rain (red, blue, and purple), Green Dream (green, black, and orange), and others. The colors are all sharp and vivid, which makes for a very impressive-looking set. Here’s a picture of the board I received, showing the striking colors.

The first thing you’ll notice about the board and pieces is their size. The checkers are 2” (50.8mm) in size, which is common in Europe, where it’s known as championship size or competition size. (In America the typical tournament set uses 1.75” checkers, or 44.5mm.) The checkers fit snugly six across as they should, neither too tight or too loose.

The board was made with a consideration for easy transport. Many European sets in this size are attractive but brutally heavy, often weighing in at over 20 pounds. The sheer weight makes it hard to lug those sets to tournaments. The BoneClub set, by contrast, is just under 11 pounds, making it easily transportable for almost anyone.

Checkers are a sturdy plastic, and the colors complement the board colors very well. The checkers are dimpled, with the center recessed a bit, which makes them especially easy to slide.

The set comes with a set of precision dice, a doubling cube, and a pair of dice cups which match the board colors. The cups lack lips, which might bother some players, but there’s plenty of room in the interior of the set to replace them with leather lipped cups from another source if you prefer.

One of the nicest features of the set is its modest price – 199 British pounds, or about $250. This compares very favorably with other sets of similar or even smaller sizes, making it a bargain for the price.

If you’re looking for a large, well-made set at a very reasonable price, the Bone.Club set is definitely worth consideration.