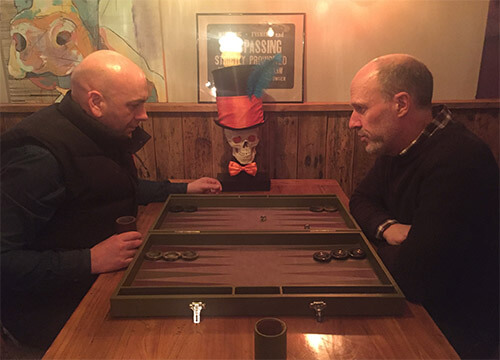 On 16th March the inaugural Cranium Cup was held and a great time was held by all. People started arriving at 7 and the dice started rolling about 7.45. It was held at the private dining area of the  Cartford Inn, Lancashire whose staff were great and the hot pot was to die for. We had two leagues – the high rollers and the low rollers. The high rollers battled it out for a cash prize whilst the low rollers played for a bottle of Grey Goose.

Vin Hamer won the high rollers after a 4 way draw between Steve Pedley, Matthew Chadwick and John Holland. Vin won and took the money with a triple 6 and a 5. Unbelievable. Fraser Bloy won the low rollers and suitably won the vodka. Fraser took on Vin in the final to win the Cranium Cup. Battle of the baldies. It was victory for Vin and he was champion.

Great people, Great venue, Great music, Great Boards, a great night. See you at the next one.

Checkout our facebook page to see the pics of the night.