Get The Full Size Experience

Backgammon For The Modern Player

Our ‘ready to play’ backgammon boards come in a range of contemporary colours – take a look at our range. Our competition backgammon boards are 20% bigger than mere Tournament size. We think it’s the difference between living in a one bed or a mansion!

We also offer a range of bespoke luxury backgammon boards made from fabrics such as suede, baize and leather. You have the opportunity to design your own board. We are happy to work with you to find the right backgammon board for you so get in touch for a free quote.

Goldie is made up with his Backgammon Board

We are so pleased with our latest customer review, check out Goldie opening his new Bone Club backgammon set for the first time. He’s a keen player so of course I’ve challenged him to a game – lets see what he’s made of; mostly gold I should think 🙂

Our house backgammon boards come in a range of contemporary colours – take a look at our range. Our competition backgammon boards are 20% bigger than mere Tournament size. We think it’s the difference between living in a one bed or a mansion!

We have taken the time to ensure our backgammon boards offer you a great playing experience with our attention to detail and quality boards. Our dice and checkers come in complimentary colours too.

We also offer a range of bespoke competition backgammon boards made from luxury fabrics such as suede, baize and leather. You have the opportunity to design your own board. We are happy to work with you to find the right backgammon board for you so get in touch for a free quote. 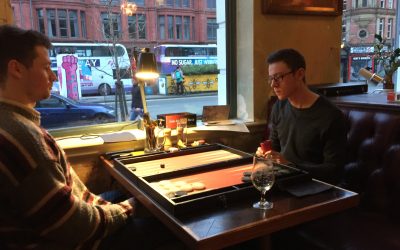 We had a great time at our first Manchester Bone club event at FLOK. A fantastic turn out for our Bone Club members and FLOK regulars. Open to Backgammon newbies and seasoned players, we all enjoyed lots of drink, food and thrilling games - what better way to brighten...

END_OF_DOCUMENT_TOKEN_TO_BE_REPLACED 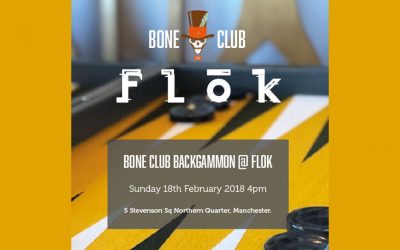 Sunday 18th February 2018 4pm Come down for an afternoon of rolling dice @ FLOK Manchester with friendly competition with Bone Club Backgammon, see www.boneclub.co.uk for more information. The afternoon is open to all skill levels of Backgammon. Boards will be...

END_OF_DOCUMENT_TOKEN_TO_BE_REPLACED 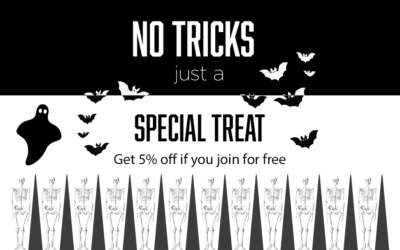 Well we couldn’t let Halloween go without a little mention. We’ve even got the kids in on the act …..   Join BoneCub this halloween for an extra 5% off your order.

Makers of bespoke, luxury backgammon boards in leather & wood.
#backgammon
+ a “ready to play” boards in 7 colours.
Made for backgammon lovers.🎲

What’s in the box? Best answer gets a Bone Club

(M+S music) This is not your normal handle, this i

It’s not far off now!!! Hopefully we’ll get so

Only three people have won the backgammon world championship twice including the legend that is Bill Robertie. So we thought we’d send him a bone club house board to get his opinion. Here is what Bill Thought…

I recently received for review a set from one of the newest suppliers, Bone.Club. The company is located in the U.K. but sells worldwide through its website, www.boneclub.co.uk. I picked a color scheme called ‘A Kind of Blue’ (blue, black, and yellow), but several other color schemes are available, such as Purple Rain (red, blue, and purple), Green Dream (green, black, and orange), and others. The colors are all sharp and vivid, which makes for a very impressive-looking set. Here’s a picture of the board I received, showing the striking colors.

The first thing you’ll notice about the board and pieces is their size. The checkers are 2” (50.8mm) in size, which is common in Europe, where it’s known as championship size or competition size. (In America the typical tournament set uses 1.75” checkers, or 44.5mm.) The checkers fit snugly six across as they should, neither too tight or too loose.

The board was made with a consideration for easy transport. Many European sets in this size are attractive but brutally heavy, often weighing in at over 20 pounds. The sheer weight makes it hard to lug those sets to tournaments. The BoneClub set, by contrast, is just under 11 pounds, making it easily transportable for almost anyone.

Checkers are a sturdy plastic, and the colors complement the board colors very well. The checkers are dimpled, with the center recessed a bit, which makes them especially easy to slide.
The set comes with a set of precision dice, a doubling cube, and a pair of dice cups which match the board colors. The cups lack lips, which might bother some players, but there’s plenty of room in the interior of the set to replace them with leather lipped cups from another source if you prefer.

One of the nicest features of the set is its fantastic price – 149 British pounds. This compares very favorably with other sets of similar or even smaller sizes, making it a bargain for the price.

If you’re looking for a large, well-made set at a very reasonable price, the Bone.Club set is definitely worth consideration.

At Bone Club we like competition and tournament backgammon boards as they really allow for a full size game creating much more of an experience than smaller boards.

The checkers size determines the size of the board. The checkers can come in many forms from Acrylic to Leather to Brass and Aluminium to name a  few.

The history of backgammon

Backgammon is a very old, arguably the oldest game in existence, next to Go and Chess. It probably originated in Mesopotamia now Iraq some 5000 years ago. Evidence supporting this fact is due to some ancient dice made from human bones were found in this area. This is the reason we call our business Bone Club. The Romans made the game popular with a version called ‘Duodecum Scripta et Tabulae’ or ‘Tables’ for short.

The history of any game can be tracked by looking for references in both art and literature. It is mentioned in early literature, for example in ‘Chaucer’s Canterbury Tales’, and in Shakespeare’s ‘Love’s Labour’s Lost’.

The title of the game backgammon first appeared in 1645. No is sure but scholars believe that it came from the Middle English ‘baec’ > back and ‘gamen’ > game. The popularity of the game was increased by an important event when some people in New York came up with the concept of doubling the stakes. The doubling cube was born. Nowadays backgammon boards are played on in all different shapes and sizes from wooden to leather to metal to fabric. Backgammon boards can range from a few pounds to many thousands of pounds. Take a look at the Bone Clubs range of backgammon boards here.

The basics of backgammon

Backgammon is played on backgammon sets, backgammon boards or sometimes backgammon tables. The components of the backgammon boards are made up from the board with 24 triangular alternating colour ‘pips’ split by a ‘bar’ in the middle. Essentially backgammon is a battle and a race eventually becoming a race once the players checkers have moved past each other. The pieces or ‘backgammon checkers’ are set up in a certain way.

The dice are rolled and the checkers are moved either clockwise or counter clockwise depending on which colour you are. The objective is to win the race and get your checkers round the board in to your home board and once they are there you can bear off removing your pieces until they are all off. Two dice are rolled each turn and checkers are moved in either two ways, 1) moving one checker the total of both dice or 2) moving two different checkers the value of each dice.

Doubles are a bit different and and usually a good roll, you get to move 4 times the value of the dice. Lets say you get a double 6 you would be able to move 4 pieces 6 points in total. In the beginning checkers can be taken by an opponent if they land on a single checker (called a blot). When pieces are taken they go on to the bar and must restart at the beginning again.